We were having our morning coffee when we disclosed our next destination of the day to the kids – Nehru Zoological Park, and they jumped with joy. It needed around half a day for exploring the zoological park, so we quickly had our breakfast and headed for the site. 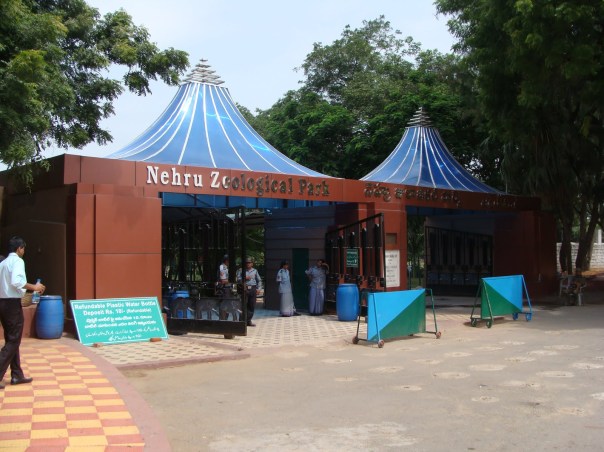 The Nehru Zoological Park, which is spread over huge area of 380 acres, is the third most visited destination in the city of Hyderabad. People visit there in huge numbers, especially with families and children. The place is a haven for nature lovers.

The zoological park was established on 6th October, 1963 and is named after the first Indian Prime Minister of our country – Jawaharlal Nehru; and has been managed and run by the Hyderabad forest department for around 4 decades.

We reached there and bought our tickets for the entry. The zoo docks an acknowledging range of biodiversity, harboring over 160 species of birds, reptiles and mammals that live in the habitat of this zoo.

We realized that this is the first Zoo in our country that has the animals arranged in the Zoological order, and that too in open enclosures. This was great to view enjoying animals in their “near natural” habitats, which was way better than animals kept in cages. We were told that it facilitated animal breeding and also study on their behavior. Not only kids, but we were also amused to see the range of animal species.

There were the Asiatic Lions, Royal Bengal Tigers, Panthers, Indian Rhino, Gaur, primates, Bears, Deers, Antelopes, Birds, Reptiles, Giraffe, Iguanas, and Chimpanzee. Many indigenous and exotic animals have successfully bred here and many animals are rehabilitated from this zoo.

We also enjoyed the Lion Safari, which is first of its kind in entire South Asia. Then we visited the Museum present inside the Zoo and explored aspects of Natural History, ancient life and numerous extinct animals in reformed models.

It was marvelous to see the nocturnal animals getting active in daylight, as the light is reversed by the zoo artificially. We also tried speed boat ride. All in all, it was a wonderful destination and is apt for family picnics.