The first day my stay in Guwahati was indeed splendid. With the placid surrounding of the Kamakhya temple I enjoyed every bit of the day. It was the second day and my children were getting excited about a visit to the famous Kaziranga National Park at Jorhat, Assam. There are several private buses that operate from Guwahati to Jorhat. Therefore all four of us took a bus to the national park’s vicinity. From there we again took a taxi which dropped us at the park. 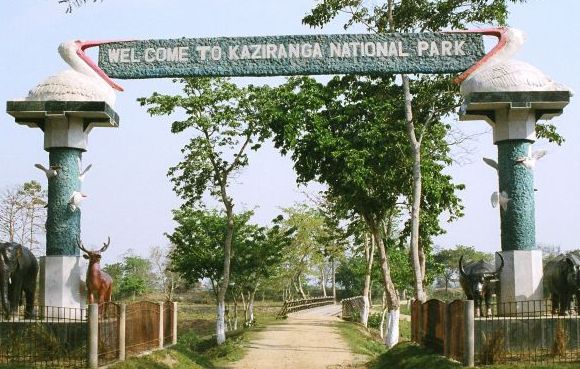 The park is located near the mighty River Brahmaputra in the eastern end of the state where there is very less human interruption. The natural resources, rich flora and fauna with an abundance of greenery make the environment more lively and cheerful. One can find several species of animals and birds along with various kinds of plants, shrubs, bushes, trees and creepers. Being a natural habitat for several endangered species, the national park keeps all the animals with utmost care and protection. The one-horned rhinoceros are found in large numbers there unlike any other national park of the country. The park was declared specifically few year back as the natural abode for the conservation of one-horned rhinoceros which weigh up to two tons and has height of more than 2 meters. Several other animals such as lion, tiger, cheetah, wild boar, bear, panther, elephant, sambar, hoolock, hog deer, swamp, deer, gibbon, wild cat andcivet cat are also seen in large numbers. Among birds, there are pied hornbill, river tern, egrets, black necked storks, pelican, fishing eagle, partridges and pond herons are seen. The gharial breed of crocodile are found in large numbers in the pond of the national park. 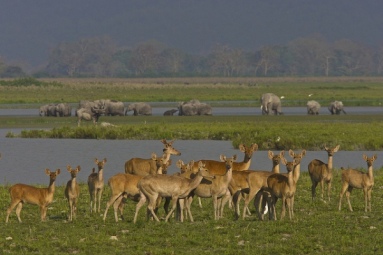 The entire region of the Kaziranga National Park at Jorhat extends over a land of 430 square kilometers. The park is also divided into four sectors where seasonal flora is observed. While there are evergreen highlands, one can also find extensive plains, marshes and rivulets there.

The park remains closed in the months from June to September. My kids enjoyed there thoroughly as I took lots of pictures of the natural resources found in the park. Overall it was a wonderful experience.

Posted on May 10, 2014, in Attractions, Tourism, Travels and tagged kaziranga national park jorhat assam. Bookmark the permalink. Leave a comment.